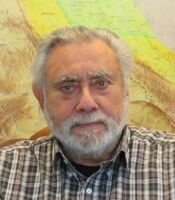 Newton Harrrison (USA), Research Professor and Director of the Center for the Study of the Force Majeure, the University of California at Santa Cruz, Director of Harrisons Studio, and Professor Emeritus, the University of California at San Diego (CA, USA). He was among the pioneers of the eco-art movement, a member of the collaborative team of Newton and Helen Mayer Harrison (who died in 2018) that worked for over forty years with biologists, ecologists, architects, urban planners and other artists to initiate collaborative dialogues to uncover ideas and solutions which support biodiversity and community development.

The Harrisons’ concept of art and their visionary projects embrace a breathtaking range of disciplines, and, on occasion, led to changes in governmental policy and have expanded dialogue around previously unexplored issues leading to practical implementations variously in the United States and Europe. They have exhibited extensively in the United States and Europe, and been awarded grants from the National Endowment for the Arts, the European Union, the German, Dutch, French and English Governments.