The exhibition “The Coming World: Ecology as the New Politics 2030–2100” is a major environmental exhibition project that was held at the “Garage” cultural center in Moscow from June 28 to December 1, 2019,  reflecting the stance and ideas of contemporary artists, theorists and activists about ecology and environmental issues. The exhibition was curated by Snejana Krasteva and Ekaterina Lazareva. It brought together historical and new works by over 50 Russian and international artists and occupied the entire Museum building. It took a look at a future already in the making, when the environmental agenda is becoming one of the main political questions.

The time period indicated in the name of the exhibition refers to two dates from the field of popular science and science fiction classics. According to many forecasts, for example, the forecast of the famous ecologist and demographer Paul Ehrlich, the date of the exhaustion of world oil reserves and, accordingly, the end of the oil age, was 2030.

The science fiction writer Arthur Clarke in the 1960s denoted 2100 as the year, when human life will be able expand to other star systems. Thus, the exhibition refers to a certain period in the future of the planet and civilization, when the exhaustion of the planet’s natural resources can occur and, at the same time, the development of technology will make the colonization of other worlds possible.

The spectrum of topics reflected at the “Coming World” exhibition revolves around two topics – environmental protection and an expanded understanding of ecology. The first topic is related to the idea that the issues of climate change, the extinction of biological species, pollution, renewable natural resources, overpopulation, etc. can no longer be perceived as secondary and should become crucial in everyday politics: in the economy, in everyday life, education and leisure etc. An expanded understanding of ecology is associated with the recognition of the close connection of biological, technological, social, and political systems. In this case, ecology is understood from the point of view of the continuous interaction of humankind, other biological species, and inanimate nature.

The project opened with John Akomfrah’s six-channel video installation ‘Purple’. Using archival footage and newly shot film from across several continents, the British artist has created an impressive saga about global warming and its effects on human life and the planet’s biodiversity. 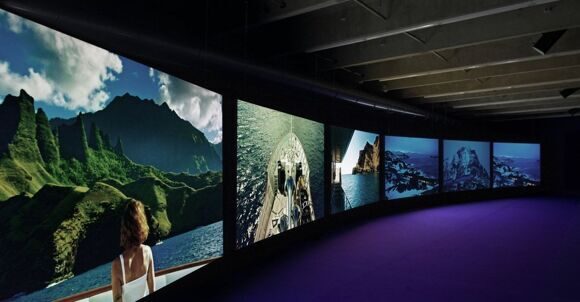 The exhibition featured a number of historical works that marked turning points in humanity’s relationship with nature: from sixteenth-century tapestries to the invention of land art in 1969, which made nature an artistic medium. The emergence of land art and environmental art coincided with a surge of interest in environmental protection, which led to the development of ecological policies at the state and public levels. In the half-century that followed, art went through various stages in its relationship with ecology: from rendering the objective world to seeing it as a system and from irony to practical solutions for everyday life.

The field of environmental art has developed alongside an increasing awareness of ecological matters and the rise of the environmental movement since the 1960s. However, “Once an area of interest for a relatively small group of people, art that addresses environmental issues has in the last five years become part of the artistic mainstream.” [1, p.6]  Art possesses its own means of solving the problems facing the planet. The artist’s role is not, however, to provide definitive answers to these problems.

“Unlike the scientist, who must follow established scientific methods, the artist is free to question and redefine anything or everything at any stage, to be wide-ranging and open to all possibilities… As a result, artistic projects are able to withstand a far higher level of risk than typical scientific experiments, which often come with expectations of tangible results or even profit for their funders. They can engage local communities and garner broad support in ways that science alone can rarely do. They can offer tools for reflection, discussion, awareness and action that lead to new ways of thinking about and of being in the world. And they can bring about real change – sometimes deliberately, sometimes unintentionally – that has lasting benefit, whether to the few or to the many.” [1, p.8]

A spectrum of engagement with nature through art is wide and embraces different positions from objective observer to active intervention in order to provide positive effects on the environment and our behavior. Environmental psychology helps to expand our understanding of the arts as a representation and dynamic form of the constructive interplay between human beings and their surroundings. One of the important concepts of environmental psychology which can help to support the ecological application of arts is that humans are engaged and purposeful in their relation to the environment.

Although environmental issues are generally discussed in terms of real life and political action, art can be a unique medium in the development of ecological discourse. Art can serve the environmental agenda, empowering its agents to employ both abstract and concrete thinking, embodying intangible relations, and synthesizing processes. In short, art epitomizes an ecological way of thinking. Ultimately, the environmental question is the most universal contemporary agenda. It is the only one that can unite people across the planet, allowing them to experience a tiny personal action as something political.

The exhibition has been developed in dialogue with artists and activists and has helped to conceptualize exhibition practice from the environmental point of view. The design was determined by the ambition to reuse structures and materials from previous projects. Where possible, works were reconstructed on site according to the artists’ instructions instead of shipping them, in order to lower the project’s carbon footprint. Some art pieces were produced especially for the exhibition, and around 10 are new versions of existing works, some of which were created in collaboration with local expert communities: beekeepers, jellyfish and water purification researchers, and halotherapists.

Other projects present artistic strategies that involve direct social action, such Wooloo’s open community, Human Hotel. Committed to the ideals of responsible consumption, the project team chose not to produce a paper exhibition guide. Garage published an e-catalogue, mobile, and audio guides of the exhibition, and a video dictionary of environmental terms in Russian Sign Language developed by the Museum’s Inclusive Programs Department. 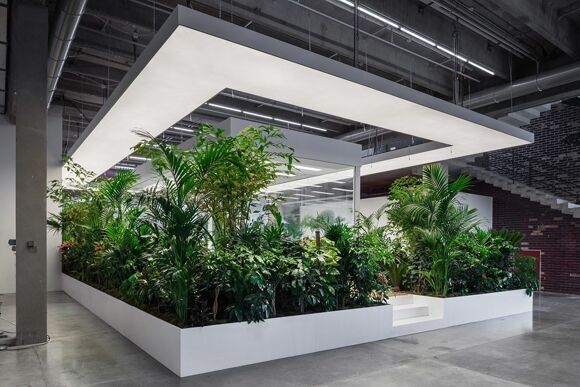 From mid-September, part of Garage Atrium was occupied by a new project for the exhibition “The Coming World: Ecology as the New Politics 2030–2100”, a large-scale biomorphic sculpture by the group Numen/For Use made from cellulose adhesive tape. Resembling a semi-transparent tentacular structure or a rhizomatic plant inside of which visitors can wander, the corridors of interconnected cocoons will reproduce the architecture we observe in nature. In some places, an emphasis was placed on performative works inside the exposition which allowed the audience to convey a more emotional perception of the world and the interaction between man and nature.

During the exhibition, there was also a large-scale eco forum “The Coming World,” including thematic tour modules. Accompanied by experienced guides, visitors could receive answers to the most pressing questions on the topics “Atmosphere,” “Water,” and “Evolution;” and take a fresh look at the relationship of a person with the environment. The project could be visited individually in company with an audio guide or together with an excursion group.

The exhibition “The Coming World: Ecology as a New Policy” was a major event, marking the cutting edge of the development of contemporary art as part of the environmental movement and the reality in which modern humanity exists. It also reflected the future with its potential scenarios for the development of humanity and the environment, which is created today by both nature and human hands. These scenarios of the future today are largely determined by the efforts of artists, scientists, environmental activists, and of the growing circle of the nature-friendly and environmentally-sensitive public.

“Ecopoiesis: Eco-Human Theory and Practice” is the first international multidisciplinary Journal focused on building an eco-human paradigm, disseminating eco-human knowledge and technology based on the alliance of ecology, humanities and the arts. Our journal aims to be a vibrant forum of theories and practices aimed at harmonizing the relations of mankind and the natural world in the interests of sustainable development, the creation of Eco-Humanity as a new community of human beings and more-than-human world. The human being is an ecological being, not separate from the world. The Ecopoiesis journal is based on that premise and aims to develop a body of theory and practice within that framework.